WASHINGTON — Former President Barack Obama offered an unusual warning to the Democratic primary field on Friday evening, cautioning the candidates not to move too far to the left in their policy proposals, even as he sought to reassure a party establishment worried about the electoral strength of their historically large primary field.

Speaking before a room of wealthy liberal donors, Mr. Obama urged Democrats to remember the long, combative slog of his primary campaign against Hillary Clinton in 2008, arguing that the 16 month battle ultimately made him a stronger general election candidate.

“For those who get stressed about robust primaries, I just have to remind you I had a very robust primary,” he told the group of several hundred donors and organizational leaders in Washington. “I’m confident that at the end of the process we will have a candidate that has been tested.”

Yet, he also raised concerns about some of the liberal ideas being promoted by some candidates, citing health care and immigration as issues where the proposals may have gone further than public opinion.

While Mr. Obama did not single out any specific primary candidate or policy proposal, he cautioned that the universe of voters that could support a Democratic candidate — Democrats, independents and moderate Republicans — are not driven by the same views reflected on “certain left-leaning Twitter feeds” or “the activist wing of our party.”

“Even as we push the envelope and we are bold in our vision we also have to be rooted in reality,” Mr. Obama said. “The average American doesn’t think we have to completely tear down the system and remake it.”

The comments marked an extraordinary entrance into the primary contest by the former president, who has been careful to avoid even the appearance of influencing the direction of the race.

His remarks offered an implicit critique of Senators Bernie Sanders and Elizabeth Warren, who have urged voters to embrace “political revolution” and “big, structural change,” as well as proposals once widely considered to be left to the liberal fringes of the party, including court packing and decriminalizing illegal border crossings.

Even as Mr. Obama has attempted to stay out of the race, the primary candidates have engaged in a heated discussion over his legacy, debating whether to stick with Mr. Obama’s architecture for health care policy or to pursue a single-payer system and offering flashes of direct criticism over his record on immigration. At the same time, former Vice President Joseph R. Biden Jr. has made his strong support for Mr. Obama and his accomplishments a hallmark of his candidacy. 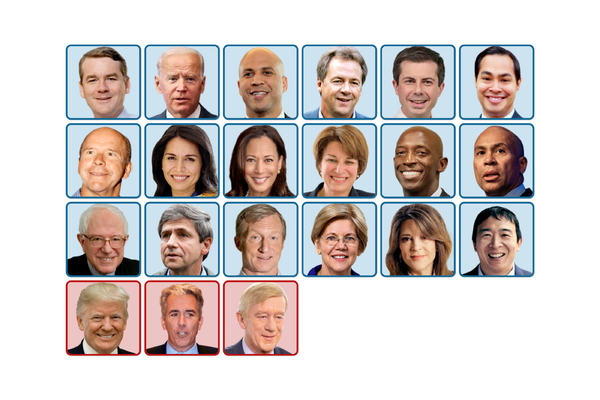 Who’s in, who’s out and who’s still thinking.

Acknowledging that candidates must “push past” his achievements, Mr. Obama urged his party’s candidates not to push too far, as he urged them to adopt a message that would allow them to compete in all corners of the country.

“I don’t think we should be deluded into thinking that the resistance to certain approaches to things is simply because voters haven’t heard a bold enough proposal and if they hear something as bold as possible then immediately that’s going to activate them,” he said.

The fact that Mr. Obama offered his reassurances at the annual meeting of the Democracy Alliance, a club of wealthy liberals who donate hundreds of thousands of dollars a year to recommended political organizations, only underscored the intended audience of his message. In recent weeks, establishment-aligned Democrats, top donors and some strategists have expressed fears that the party lacks a strong enough candidate to defeat President Trump.

They question whether Mr. Biden has the ability to compete in a multistate primary campaign, fret about Mr. Sanders’s and Ms. Warren’s viability in the general election and remain skeptical that Pete Buttigieg, the mayor of South Bend, Ind., can broaden his appeal beyond white voters.

Their concerns have prompted the late emergence of two experienced candidates, Deval Patrick, the former governor of Massachusetts and a close friend of Mr. Obama, and Michael R. Bloomberg, both of whom entered the field after nine candidates had already dropped out.

Those worries are not necessarily shared by voters in early states, where surveys show that most Democrats have gravitated to a short list of four candidates and feel the field remains too large.

“If you talk to the voters they don’t feel the need for another candidate,” said Kathy Sullivan, the former chairwoman of the Democratic Party in New Hampshire. “We haven’t been sitting around in New Hampshire saying we need a hero to come and rescue us.”

Since leaving office nearly three years ago, the former president has mostly remained out of the public fray.

While he’s headlined fund-raising events for Democratic committees, the former president has kept a low profile in the presidential race, meeting privately with most of the Democratic candidates but telling friends and political allies that neither he nor his wife, Michelle, have plans to endorse anyone and do not see it as their place to steer the party’s future.

Mr. Obama has expressed interest, at different times, in rising stars like former Representative Beto O’Rourke of Texas and Mr. Buttigieg. Mr. Obama had issued a warm statement about Mr. Biden’s entry into the primary but had declined to endorse him or anyone else.

During his nearly hourlong remarks on Friday, Mr. Obama offered only one clear endorsement, though not exactly the one many Democratic donors in the room wanted to hear.

Mr. Obama was interviewed by Stacey Abrams, who drew national attention during her unsuccessful run for governor of Georgia last year and is widely considered to be on the shortlist for the vice presidency — no matter which candidate ultimately wins the nomination.

“I love me some Stacey Abrams,” he said.

Another Democrat Rep. Arrested By Capitol Police For Protest At Senate Office Building

Crypto Nomads: Surfing the World for Risk and Profit

‘Not Out of the Woods’: C.D.C. Issues Warning to the Unvaccinated