Top Lawmakers Not Told of Police Request for Backup Before Riot, Aide and Others Say

WASHINGTON — In the days leading up to the mob attack on the Capitol, congressional security officials never let House and Senate leaders know that the Capitol Police had warned they might need National Guard backup, according to a congressional aide and other people familiar with the matter.

The police request, made to the House and Senate sergeants-at-arms, was prompted by intelligence that showed Trump supporters planned to target the Capitol itself as Congress certified the Electoral College vote on Jan. 6, according to a congressional official. The Capitol Police asked the sergeants-at-arms to request that the National Guard be placed on standby.

But the sergeants-at-arms, Michael C. Stenger of the Senate and Paul Irving of the House, rejected the request without raising the issue with either the Senate majority leader, Mitch McConnell, or Speaker Nancy Pelosi, according to the aide and another person familiar with the matter.

Mr. Stenger and Mr. Irving, who have resigned amid the fallout from the violence, would most likely have had to ask the leaders whether to approve the requests for such a serious measure, according to former sergeants-at-arms.

The sergeants-at-arms and the chief of the Capitol Police were also among officials who briefed lawmakers the day before the riot and reassured them that they were prepared for the events that day, going so far as to say the National Guard was on standby, though only a modest contingent was on duty to provide traffic control. The sergeants-at-arms are the chief law enforcement officers for the House and Senate, responsible for security matters and keeping order.

Their inaction was a key breakdown in a series of security decisions that left the Capitol inadequately protected as thousands of Trump rioters breached the building, leading to the melee that killed a Capitol Police officer and one of the rioters. 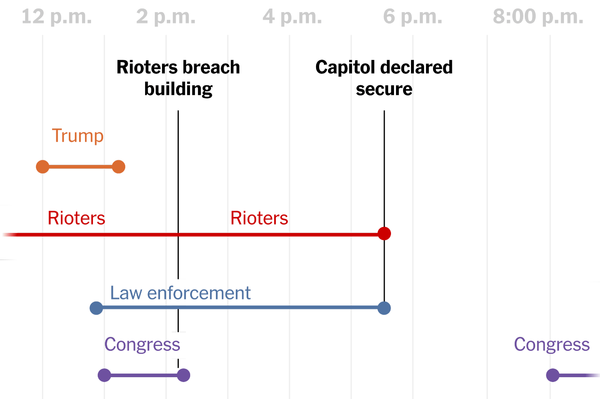 Critical Moments in the Capitol Siege

Here is a moment-by-moment timeline of events on Jan. 6, when a mob assaulted the U.S. Capitol.

Mr. Stenger and Mr. Irving did not respond to email or phone requests for interviews, or knocks on their doors.

The details of the communications breakdown came amid new promises on Friday of sweeping reviews of the government’s failures ahead of the riot, as well as a Capitol Police investigation into whether Republican lawmakers aided members the insurrectionist mob beforehand.

The Capitol Police inquiry focuses on accusations by members of Congress that their own colleagues might have allowed members of the pro-Trump mob into the building in the days before the assault. Investigators were combing visitor logs, the Capitol Police said, and Ms. Pelosi spoke of legal jeopardy for those who aided the riot.

“If in fact it is found that members of Congress were accomplices to this insurrection — if they aided and abetted the crimes — there may have to be action taken beyond the Congress in terms of prosecution for that,” Ms. Pelosi said.

Newly released court documents made clear the danger at the Capitol was worse than feared, and prosecutors accused some of the riot’s most prominent figures of intent to harm lawmakers.

At least 40 people have been arrested so far and nearly 100 charged in connection with the riot, law enforcement officials told reporters on Friday. The F.B.I. has conducted more than three dozen interviews in connection with assaults on law enforcement officials, including the death of a Capitol Police officer, Brian D. Sicknick, a bureau official said.

On Friday, federal prosecutors in Washington unsealed charges against one of their most wanted, Dominic Pezzola, a 44-year-old former Marine and member of the far-right Proud Boys group. In photographs and video from Jan. 6, Mr. Pezzola appeared to lead a group of men into the Capitol — using a stolen police shield to break in — in some of a handful of images that has come to symbolize the lawlessness and violence of the day.

According to a cooperating witness quoted in court papers, Mr. Pezzola had taken the shield from a Capitol Police officer. He and the mob he led intended to kill “anyone they got their hands on,” the witness said, including Ms. Pelosi and Vice President Mike Pence. Mr. Pezzola, a boxer known as Spaz, was intent on returning to Washington with his group next week to wreak more havoc at President-elect Joseph R. Biden Jr.’s inauguration, according to the witness.

“They plan to kill every single” person “they can,” the witness said, adding that Mr. Pezzola and his men had access to firearms.

Also among those arrested Friday was Jenna Ryan, a Texas real estate agent and life coach, who took a private plane to Washington to participate in the riot, according to court documents. She was charged with disorderly conduct and unlawful entry. Ms. Ryan had filmed herself in the Capitol during the riot, and afterward, at least initially, defended her actions and said she had “answered the call of my president.”

New accusations of murderous intent among some rioters and additional security failures made all the more urgent the questions of how to protect the Capitol going forward as next week’s inauguration looms.

Ms. Pelosi said she had asked the retired Lt. Gen. Russel L. Honore, who helped coordinate the military relief efforts around Hurricane Katrina, to conduct “an immediate review of the Capitol’s security infrastructure, interagency processes and procedures, and command and control.”

“We must subject this whole complex, though, to scrutiny in light of what happened,” she said, adding that House committees would begin conducting their own investigations into what took place.

Mr. Honore’s inquiry will undoubtedly look at the actions of the sergeants-at-arms.

In the days leading up the siege, Mr. Irving, the House security chief, was against putting the National Guard on alert because he had concerns about the “optics” of such a move, the former Capitol Police chief Steven Sund said in an earlier interview with The Washington Post.

On Friday, Ms. Pelosi’s deputy chief of staff, Drew Hammill, and a person close to Mr. McConnell said that the leaders had not been informed of any request for the National Guard before Jan. 6.

Ultimately, Capitol Police made no request for Defense Department support, according to Representative Jason Crow, Democrat of Colorado and a former Army Ranger who served in Iraq.

The Defense Department made several more attempts to offer National Guard resources to the Metropolitan Police of Washington and to the Capitol Police and were repeatedly told no additional resources were needed, according to Mr. Crow, who was briefed on the situation by the Army secretary, Ryan D. McCarthy.

Beyond the congressional inquires, inspectors general from four federal agencies are opening a coordinated investigation into the catastrophic failures that led to the riot.

The review will be jointly conducted by the inspectors general from the Departments of Justice, Defense, Homeland Security and Interior, according to a statement from the office of Michael E. Horowitz, the Justice Department inspector general.

Intent on avoiding a repeat of the Capitol riot during the inauguration, federal officials continued the transformation of Washington into an armed camp. New restrictions for gatherings were announced, and the National Mall was nearly completely locked down.

The riot inside the U.S. Capitol on Wednesday, Jan. 6, followed a rally at which President Trump made an inflammatory speech to his supporters, questioning the results of the election. Here’s a look at what happened and the ongoing fallout:

Accenting the feel of a war zone, officials said they would establish a “green zone” in downtown Washington, a term used most prominently to describe the heavily fortified heart of Baghdad during the Iraq war.

Some of the new fencing, barriers and security measures are likely to be permanent. Mayor Muriel E. Bowser of Washington told reporters at a news conference that she believed the nation’s capital would return to a “new normal” of stronger security.

“We saw white extremists storm the Capitol Building who were trained and organized and seemingly with the intent to capture the vice president of the United States and perhaps harm other lawmakers,” she said. “So we all have to think about a new posture.”

Federal agencies have also begun to identify those captured on video at the Capitol with weapons or engaging in violence and putting a handful on the so-called no-fly list aimed at preventing suspected terrorists from boarding flights, according to an administration official. It was unclear how many people had been restricted from flying.

New court documents released this week made clear that some of the people who led the crowd into the Capitol had traveled to Washington intent not on peacefully protesting but to try to overturn the election results by kidnapping, threatening or even assassinating lawmakers.

During the Capitol riots, Jacob A. Chansley was photographed in the building bare-chested, with his face painted red, white and blue, and wearing a fur headdress with horns and holding an American-flag draped spear.

While his costume was colorful, prosecutors said his intentions were dark. In an 18-page document that was submitted in court on Thursday, prosecutors said Mr. Chansley approached a Capitol Police officer and screamed that members of the mob “were there to take the Capitol and to get congressional leaders.”

Mr. Chansley, a fixture of the QAnon conspiracy movement known as the “Q Shaman,” wrote a note to Mr. Pence, reading, “It’s only a matter of time, justice is coming.”

On Friday, Magistrate Judge Deborah M. Fine of Federal District Court in Phoenix denied bail to Mr. Chansley, saying he was “an active participant in a violent insurrection to overthrow the United States government.” When Mr. Chansley requested to speak, Judge Fine told him it was “not advisable.”

In Texas, a federal prosecutor said another suspect, Lt. Col. Rendall Brock Jr., planned to take hostages with zip-tie handcuffs when he stormed the Capitol last week, and the lawyer pointed to violent online threats that Mr. Brock made in the run-up to the mob attack.

Steven M. D’Antuono, the head of the F.B.I.’s Washington Field Office, said the public provided the F.B.I. with about 140,000 digital tips, noting that friends and family members had turned in rioters and advised people involved in the violence to surrender before the F.B.I. found them.

“If this investigation was a football game,” Mr. D’Antuono said, “we would still be in the first quarter.”

The parliamentarian ruled that the provision, which would gradually increase the wage to $15 an

Give Biden a Chance? On Covid Aid, Some Trump Voters Just Might