Tonight’s Democratic Debate: What Time It Is and What to Watch For 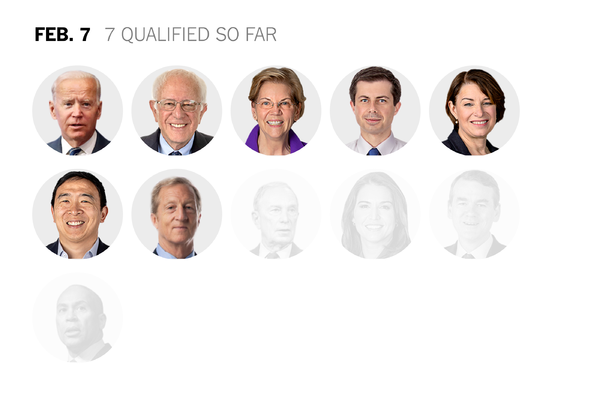 Who’s Qualified for the Next 2020 Democratic Debate?

Here’s a look at who’s made the cut for the February debates so far.

Buttigieg on the defensive?

MANCHESTER, N.H. — In the seven previous Democratic debates, Mr. Buttigieg has been by turns the relative unknown, the surprising upstart and the polling leader.

Tonight he’ll show up as the winner. Sorta.

After finishing in a virtual tie for first place with Mr. Sanders in Iowa’s maligned caucuses, Mr. Buttigieg figures to be put on the defensive by his rivals in Manchester.

Since arriving in New Hampshire this week, Mr. Biden has attacked Mr. Buttigieg’s experience and Mr. Steyer has attacked him in a TV ad. Ms. Klobuchar remains aggrieved about his rise and aides to Mr. Sanders regularly mock his high-dollar fund-raising schedule.

And they’re all annoyed that he declared victory in Iowa on Monday night before any caucus results were reported.

No longer can Mr. Buttigieg’s opponents presume he’ll fade away as an upstart candidate. And they all have reason to try to knock him down a few pegs in New Hampshire, where he is competitive in the polls.

The question for Mr. Buttigieg is, how does he respond to attacks during the televised debate? He’s proven to be a skilled counterpuncher in past debates, slicing back at Ms. Warren for her own fund-raising hypocrisy in December and telling Ms. Klobuchar that his military experience trumps her work in Senate committee hearings.

But tonight might be the first time Mr. Buttigieg faces a sustained offensive from multiple rivals at once — how he handles it may influence his fortunes in Tuesday’s primary.

Can Biden land his punches?

Coming off a disappointing fourth-place finish in the Iowa caucuses, Mr. Biden laced into two top rivals in New Hampshire — Mr. Sanders and Mr. Buttigieg — in his fiercest frontal attack yet in the 2020 race.

Mr. Biden needs to arrest his slide with moderate voters who like Mr. Buttigieg, and with blue-collar voters to whom Mr. Sanders appeals — but how pointed will he be on the debate stage?

Mr. Biden served for decades as a decorous senator from Delaware, and it is rarely his instinct to go for the jugular. He has previewed sharp contrasts with rivals before, only to backpedal under questioning. How tough and effective will he be in his exchanges with Mr. Sanders and Mr. Buttigieg?

Will Warren go on the offensive?

Ms. Warren took incoming fire from the party’s liberal and moderate wings for months, and she finished Iowa in a comfortable third place, behind Mr. Sanders and Mr. Buttigieg. Even though her situation is not as dire as that of Mr. Biden, who finished a distant fourth, Ms. Warren needs to recapture the momentum that made her one of the leading candidates in the summer and early fall.

In previous debates, Ms. Warren has largely stuck to her affirmative message — except for one big diversion, when she attacked Mr. Buttigieg for raising money with big donors. Now, as Mr. Buttigieg eats at her base and Mr. Sanders occupies the party’s left flank, Ms. Warren’s supporters are urging her to attack her rivals more directly.

The campaign has also largely stayed away from Mr. Biden — could she deliver a blow on the struggling front-runner that shakes up the race?

Mr. Sanders was robbed of a celebratory Iowa speech because of the organizational chaos in the state’s caucuses, but he is certainly ahead in the first-round raw vote and in a statistical tie with Mr. Buttigieg for delegates. At the debate, Mr. Sanders will have an opportunity to highlight his winning coalition, which included an influx of racial minorities and working-class voters brought in through the campaign’s aggressive strategy of focusing on some satellite caucuses. Liberal groups have fired off news release after news release, cheering Mr. Sanders’s Iowa showing as the first step of their electoral movement.

Mr. Sanders will also have a weakened Mr. Biden to target after Mr. Biden’s self-admitted “gut punch” in Iowa. According to Sanders aides, look for the Vermont senator to target the former vice president, who his camp regards as more of a long-term rival than Mr. Buttigieg.

Will anyone shake up their polling trajectories?

Mr. Sanders is up double digits over Mr. Biden. Or he and Mr. Biden are effectively tied. Or something in between is afoot.

Taken together, the publicly available New Hampshire surveys — a scarce commodity for much of the race — paint a picture of a fluid and uncertain campaign in the state. But several trends are evident.

Mr. Sanders, of neighboring Vermont, has consistently held a lead, though the margins have varied. In recent polls there have been signs of growing traction for Mr. Buttigieg. Ms. Warren has struggled in 2020 New Hampshire polls, and with the occasional exception in recent weeks, Mr. Biden has too.

At Friday night’s debate, can Mr. Buttigieg and Mr. Sanders build on Iowa momentum to cement their strength in New Hampshire? Can Ms. Warren and Mr. Biden reset the narrative after their disappointing showings in Iowa — and in recent New Hampshire polling? Will anyone else jump decisively into the top polling tier in the homestretch?

Sudan Is Focus of U.S. Efforts to Improve Ties With Israel

By Lowering the Debate Bar for Biden, Has Trump Set a Trap for Himself?

Sara Gideon Is Running Strong Against Susan Collins in Maine

Two years ago Sara Gideon, the Democratic speaker of the Maine House of Representatives, announced

The Judiciary Committee will hold hearings starting Oct. 12. Here is what’s next.

ImageIt appears that Senator Mitch McConnell, the majority leader, has the votes to confirm a