January Debate Will Be Harder to Qualify For, D.N.C. Announces

LOS ANGELES — One day after seven candidates took the stage for the most intimate debate of the Democratic presidential primary cycle so far, the Democratic National Committee increased the qualification standards for its next debate in January, making it likely that the field of candidates will be winnowed even further for the event.

The announcement on Friday that candidates will need to receive at least 5 percent support in four qualifying polls or 7 percent in two early-state polls, in additional to amassing at least 225,000 individual donors, came despite intense public and private lobbying from Senator Cory Booker of New Jersey and his allies to lower the barrier to participate in the party’s debates. That cause gained momentum in recent days after just one person of color, the entrepreneur Andrew Yang, qualified to participate in Thursday’s debate in Los Angeles.

Mayor Michael R. Bloomberg of New York, a billionaire who is self-funding his campaign, has also met the polling standard but will be thwarted by the donor requirement, unless he relaxes his opposition to accepting contributions from others and is able to attract hundreds of thousands of donations in less than a month. 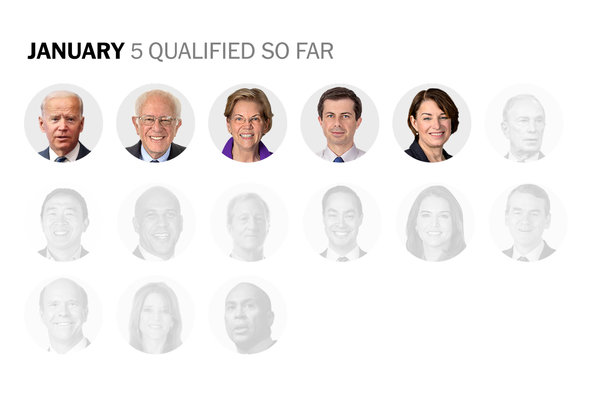 Who’s Qualified for the Next 2020 Democratic Debate?

Here’s a look at who’s made the cut for the January debate so far.

But two candidates who were on Thursday’s debate stage in Los Angeles — the businessman Tom Steyer and Mr. Yang — will have work to do in order to qualify for January.

“Whatever qualifications they set, you know that this guy is going to be there,” Mr. Yang said Thursday while touring a pop-up store selling campaign merchandise in the Fairfax section of Los Angeles. “The Yang Gang cannot be stopped. We are growing when other campaigns are shrinking and we are going to be there through the spring as the voting gets underway.”

Short of a dramatic turnaround in his fortunes, the 5 percent threshold will doom Mr. Booker’s chances of returning to the debate stage. He has not reached 5 percent in a qualifying poll since March. The former housing secretary Julian Castro, the only Latino candidate in the race, has never reached 5 percent.

Patrick Murray, director of the Monmouth University Polling Institute, which puts out one of the surveys that can help candidates qualify for debates, said it currently only plans to release one qualifying poll before the January deadline. He added that it seemed unlikely that a total of more than four or five qualifying polls will be released in time for the debate next month.

“We saw a big gap in polling output because of Thanksgiving for this last debate,” he said. “Now we’ve got an even longer holiday period where I don’t think a lot of people are going to poll.”

The January debate, scheduled to take place at Drake University, could be moved or postponed if President Trump’s impeachment trial in the Senate is taking place in mid-January. It remains unknown when the trial will begin or how long it will last.

Mr. Murray noted that the focus on impeachment could tilt pollsters toward conducting national surveys rather than ones in early voting states, which could hurt candidates who have had no choice but to invest heavily in advertising in places like Iowa and New Hampshire.

Three more debates are planned for February — one each in New Hampshire, Nevada and South Carolina.

Mr. Booker on Saturday organized eight other Democratic presidential candidates to sign a letter to Tom Perez, the Democratic National Committee chairman, asking that debate thresholds be lowered in a way that would allow him and Mr. Castro to participate in the January and February debates.

But Mr. Perez spent little time considering their request. Instead he spent the weekend facilitating an agreement for unionized cafeteria workers at Loyola Marymount University, in order to avoid picket lines outside Thursday’s debate, which took place there.

President Trump’s favored Senate candidate in Alabama, Tommy Tuberville, is known for his career as

At Mt. Rushmore and the White House, Trump Updates ‘American Carnage’ Message for 2020

Forget the luxury-suite studios soaring above the convention stage. Or the morning-show stars flown in

At Mt. Rushmore and the White House, Trump Updates ‘American Carnage’ Message for 2020