Donald Trump Jr. tests positive for coronavirus. He has been isolating since Monday.

Donald Trump Jr., the president’s son, tested positive for the coronavirus at the beginning of the week and has been isolating since Monday, a spokesman for Mr. Trump said on Friday.

He added that Mr. Trump has shown no symptoms and is following virus protocols.

President Trump tested positive for the virus in October and was hospitalized as his symptoms worsened. The president underwent a series of invasive therapies typically reserved for people seriously sick with Covid-19.

Donald Trump Jr.’s announcement comes hours after Rudolph W. Giuliani’s son, Andrew Giuliani, a special assistant to the president, announced on Twitter that he had tested positive. This week, two Republican senators, Rick Scott of Florida and Chuck Grassley of Iowa, also said they had the virus.

After an exposure to the virus, symptoms can take up to 14 days to appear, if they ever appear at all. In that time, the virus can still spread from person to person.

According to guidelines from the Centers for Disease Control and Prevention, Mr. Trump should isolate for at least 10 days following his positive test. The spokesman did not indicate which test Mr. Trump had taken.

In recent months, Mr. Trump has questioned the seriousness of the coronavirus pandemic, saying in a Fox News interview that since deaths from the virus had dropped to “almost nothing” the outbreak had come under control. That day deaths in the United States topped 1,000.

Mr. Trump’s diagnosis, reported earlier by Bloomberg, comes as the virus is surging across the nation. As of Thursday, at least 1,962 new coronavirus deaths and 187,428 new cases were reported in the United States. 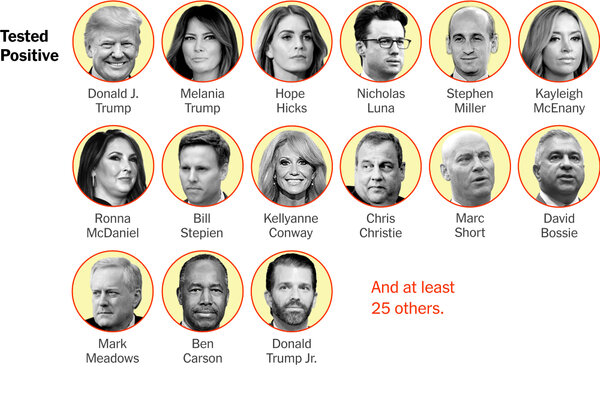 After a small White House outbreak in September and a wave of cases in early October, the coronavirus has returned to the top of the Trump administration.

In what one local CBS affiliate in Georgia described as "jaw-dropping," President Trump's lawyers presented

Unemployment Claims Drop, but Holiday Week May Be a Factor

The decline was the first in three weeks, despite a resurgence of Covid-19 cases. Economists

Native Americans Helped Flip Arizona. Can They Mobilize in Georgia?

Biden Asks Fauci to Stay, and Plans a Mask Plea